Min I've often wondered just how novels based on television shows can go for the whole epic, "world shall be destroyed" theme and have things fit in with the continuation of the televised stories later on. Minor things evident in the first novel only now resolve themselves, and as with most time travel jaunts, do so in a spectacularly mind-bending way.

I can still never quite shake off the yoke of "its time travel, and was erased from time, therefore it never happened". Even so, this series takes DS9 from its very first on-screen showing, to years before, to decades after and back again, all from a post "what you leave behind" POV. I would recommend that if you are a serious fan and do care to know the ins and outs of everything, watch the end of the TV series first.

Although you're probably two-thirds of the way through the trilogy or something by the time you're reading this, so alas I shall shut up. Feb 16, Amanda rated it really liked it. A pretty solid ending to a very fun time travel story. We finally got more Garak, which made me really happy and almost pushed this to 5 stars, but things did get a little convoluted at points.

I definitely enjoyed the series and will be tackling some more of the DS9-related Star Trek novels this year, I think. Wow, things really came together for this book and really wrapped up this trilogy pretty well. A lot of the setup from the first two books finally came together in this one and it created a very complicated narrative puzzle that the characters had to navigate their way out of.

But really, we knew there would a big time travel related resolution to things and the book did not disappoint in this manner.

Millennium: The Fall of Terok Nor/The War of the Prophets/Inferno


Mar 05, Dave rated it did not like it Shelves: didn-t-finish. I thought first two books in the series were pretty good. This one seemed convoluted with a bit too much filler for my liking. At some point it started to become a chore to read and I lost interest in the outcome. I didn't bother to finish it.

Oct 09, Oz Trekkie rated it it was amazing. This review has been hidden because it contains spoilers. To view it, click here.


A whole novel after the end of the multiverse!!! Fantastic story!! Dec 23, Stephen rated it it was amazing Shelves: st-ds9 , favorites , star-trek , the-millennium-trilogy. But everything he had ever done was for nothing. Everything that had ever been was for nothing. Zero seconds. It was over.

The universe is kaput. The two Bajoran wormholes have collided and the very fabric of existence winked away, just as the Bajoran prophecies foretold. But the competing gods of Bajor, the Prophets and the Pah-Wraiths, are still fighting "I did everything I could," Sisko cried into the silence that engulfed him.

But the competing gods of Bajor, the Prophets and the Pah-Wraiths, are still fighting -- and while their cosmic struggle tarries for just a little while longer, hope lingers for what few survivors there are. In the final moments of the universe's existence, two ships entered the Bajoran wormholes, and were thus sheltered from oblivion.

Aboard them are the crew of the Defiant, three 'emissaries', and a scattering of civilians. As surprised as most of them are to learn that the Bajoran prophecies came to past, the wormholes -- now, truly, the Celestial Temple -- also carry within them the space station Deep Space Nine, protected -- as with the ships -- inside a bubble of existence. Deep Space Nine still exists -- though in what timeframe, no one can be sure -- and by returning home, Sisko and his crew hope to change history and prevent the end of everything. This is truly a wild series.

Inferno is another beast all together: a science fiction novel in which our characters try to figure out a way to restore existence from the past without actually changing the past: every timeline, every 'universe' is like one face of a diamond which is the multiverse, and if the multiverse itself is destroyed, nothing else matters. I like time travel stories, and this novel forces Sisko, Kira, O'Brian, Jadzia Dax, Worf, Jake Sisko, Quark, Garak, and others to scurry around the station while constantly shifting to various timeframes, trying to figure out some way of preventing history from repeating itself while being harried by two madmen, the Pah-Wraith possessed Gul Dukat and Kai Weyoun, infested by nanites that make him a loyal servant of the other Pah-Wraiths.

Though this has been a series deep in Bajoran mythology, here it takes a backseat to temporal mechanics and a race against True to form for a book about time travel, quite a few plot developments are counterintuitive and resolve -- or create -- some of the mysteries seen in the first book. The ending shocks even the characters. While this series isn't notable for the kind of intense character drama seen in say, David Mack's work, there are some golden scenes in here -- most notably, between Sisko and his son.

This series was written after the television show's end, and is set before "Tears of the Prophets", in which a canon Pah-Wraiths v. Prophets storyline erupts. Jadzia Dax is killed there, while she's still alive and kicking here. Foreshadowing for the rest of the sixth season and the whole of the seventh season abound, though they tend toward the depressing -- the writers allude to Jadzia's future death on several occasional throughout the series.

As good as I remembered. 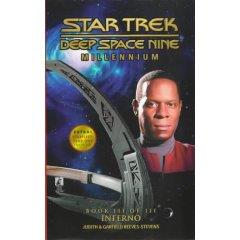 Though a different kind of epic story than Destiny, Millennium is grand storytelling in its own class. Dec 16, Roger McCoy rated it it was ok. Very disappointed. Normally love the Reeves-Stevens books and their work on Enterprise , but Inferno and Millennium in general is a convoluted mess. From the redundant, unimaginative, and even downright out-of-character "personal hells" of the beginning to the downright nonsensical "revelation" of the end how precisely is this meant to match what came before?

This isn't simply a matter of being bored by the physics of it all either. That said, the explanations were frequently redundant, genuinely important parts are flat-out skipped, and the characterization often didn't feel "right".

The whole book feels like a detailed outline turned into a rough first draft, which was promptly published. I'm glad to see that many readers enjoyed the book far more than I did.

What We Left Behind: Looking Back At Star Trek: Deep Space Nine (2019) - Official Trailer (HD)

I only wish I could bring myself to agree with them. Jul 31, Dianah rated it it was ok Shelves: books , star-trek. It's hard to explain how this book fails without spoilers. What I will say is Bashir is given information in Book 2 of the series, The War of the Prophets , that he choses to never divulge to anyone even after that knowledge would not change the timeline. Because it's a cute, fun little scene in book 2 and I can only guess the authors forgot about it. Much of this book takes place back and forth in time, but it doesn't feel like it was well plotted out before they wrote it.

The characterizations are still good with the exception of the opening chapters where I think the characters could have come up with much more frightening images. The unanswered events from the first book are finally, if not in a satisfying manner, resolved. Anyone who starts reading the series will want to stick it through to the end, but don't expect a high impact ending.